WANT TO ADDRESS THE GREATEST FOREIGN THREAT TO US DEMOCRACY? FIX VOTING MACHINES 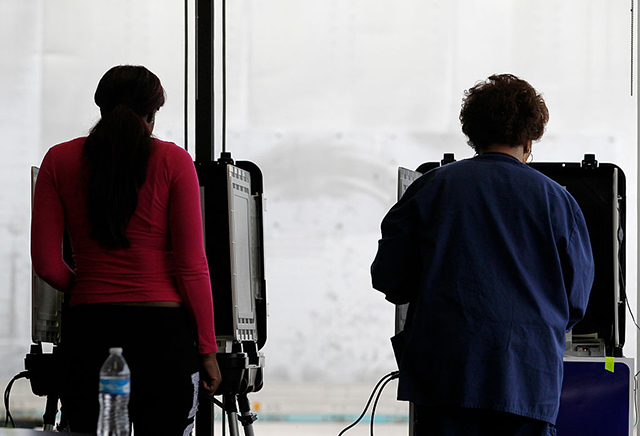 Democracy, the very essence of the United States, is under attack, we’re told at least once a week. Not because Wisconsin Gov. Scott Walker refuses to hold special elections — literally denying all citizens the right to vote — because he’s afraid Republicans will lose. Not because the Pennsylvania GOP is threatening to impeach judges for issuing a fair redistricting map. And not because racist Republican voter ID laws are an extension of the decades-long attack on the Voting Rights Act, including the mass disenfranchisement of formerly incarcerated people.

All of those things are happening, of course, and have a direct and harmful impact on the right to vote and have one’s vote counted in the United States, especially if you’re likely to vote Democrat.

But to hear it from most media outlets, a Russian disinformation campaign waged through Facebook and Twitter is currently the primary threat to the essence of US democracy.

When it comes to the Russia investigation, it appears that Special Counsel Robert Mueller is doing important work, and that the Trump campaign was staffed by at least one unwitting spy, Carter Page, along with other staffers who consciously broke the law. However, making it seem as if the main threat to democracy is coming from abroad is a mistake. It is an opportunity for seemingly objective journalists to make explicit value judgements — most blatantly, the judgement that Russia is a threat — despite the fact that they generally shy away from making such judgments concerning domestic policy.

That said, there is a significant threat to US democracy from abroad — and domestically — that isn’t getting the mainstream attention it deserves. This is the unconscionable vulnerability of electronic voting systems throughout the country.

On Tuesday, NSA head Admiral Mike Rogers testified before Congress that no one in the Trump administration has directed him to confrontRussian meddling operations “where they originate.” Calls to make Putin “pay a price” to the side, we know from leaks by NSA-contractor Reality Winner and interviews with Department of Homeland Security officials that Russian hacking groups successfully penetrated state voting systems in at least 21 states.

As of now, there’s no evidence that any votes were changed, or that any voter rolls were purged. With enough time and incentive, Russian hackers or other outside groups could gain the necessary experience to tamper more directly with voting outcomes in the coming election cycles.

There are clear steps, short of countermeasures directed inside Russia, that can and should be taken to secure the integrity of US votes. The first step, according to the Brennan Center for Justice, which has studied the issue extensively, is to update old voting machines. According to a study published this month, “229 officials in 33 states reported they need to replace their voting machines by 2020. Most of these officials do not currently have enough funds for those replacements.” The Brennan Center’s research also found that “more than 500 election officials in 41 states … will use machines and computers in this year’s midterms that are more than a decade old.”