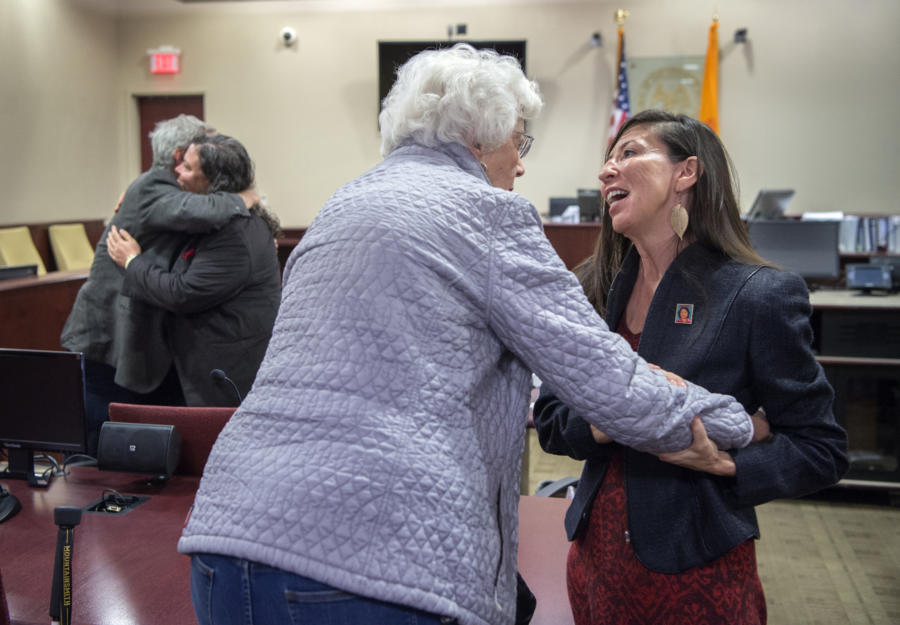 SANTA FE — Santa Fe is set to become the first city in New Mexico to use ranked-choice voting after a state district court judge ruled that the city can’t postpone implementation of the election system any longer now that appropriate vote-counting software is ready to go.

Attorneys for the city said after Wednesday’s court hearing that it would be up to policy makers — the City Council — to decide whether to appeal the decision. Santa Fe voters approved a change to ranked choice voting, also known as “instant runoff,” nine years ago, but it has never been used.

A group of Santa Feans sued after the City Council decided in July to delay implementing ranked-choice until 2020 due to concerns that software would not be ready for the 2018 campaign and more time was needed to educate voters about the voting method.

Maria Perez of FairVote New Mexico, a nonpartisan group that advocates for ranked-choice voting, was one of the petitioners who went to court.

“I think that Judge (David) Thomson’s decision is a victory for the voters of Santa Fe, who have been waiting for this for almost 10 years. It’s also a victory for democracy in New Mexico,” she said.

Santa Fe voters in 2008 overwhelmingly approved an amendment to the city charter to implement ranked-choice voting for municipal elections starting in 2010, “or as soon thereafter when equipment and software for tabulation of votes and the ability to correct incorrectly marked, in-person ballots is available at a reasonable price.”

“There’s clearly the capability to do that,” District Court Judge David Thomson said, referencing now-certified technology for ranked-choice voting. “That software is, quote, ‘available,’ as the court finds based on the witness testimony.”

On Tuesday, Secretary of State Maggie Toulouse Oliver testified that ranked-choice software is being installed in voting machines statewide. And she said Santa Fe has “plenty of time” to come up with ranked-choice ballots for the March 6 election.

The software wasn’t certified by the Secretary of State’s office until Sept. 27. But Thomson said certification made the software “available” as of that date and noted that the City Council failed to revisit the issue afterward.

Assistant City Attorney Zach Shandler said after Wednesday’s hearing that the council didn’t reconsider ranked-choice after Sept. 27 because that date was already beyond the “point of no return.” He had argued before Thomson that the city was already three months into its election cycle for the 2018 campaign. Candidates have filed petitions to gain ballot spots for mayor and four council seats.

“The judge had a different view of when the point of no return was,” Shandler said outside court.

Thomson said he believed that when the council heard from Kari Fresquez, elections director for the Secretary of State’s office, during the July meeting, councilors appeared to be under the impression that questions about the readiness of software applied only to the Santa Fe election. In fact, Dominion Election Systems’ “Democracy Suite 5.4” software is to be used in all New Mexico elections in 2018, including some taking place prior to Santa Fe’s. So the software had to be certified in time for balloting next year.

Witnesses who testified before Thomson on Tuesday also said the software has a module that could be activated so ranked-choice voting could be conducted in just certain jurisdictions.

Ranked-choice voting is already used in other American cities, like San Francisco and Minneapolis. Voters rank candidates in order of preference when there are more than two candidates in a race. If no candidate is the first choice of more than 50 percent of the voters, the candidate with the fewest first-choice votes is eliminated and the second choices of voters for the eliminated candidate are then applied to the remaining candidates. The process is repeated until a winner is determined.

Ranked choice would apply to three races on the Santa Fe 2018 ballot. Five candidates are running for mayor and there are three candidates for council seats in districts 2 and 4.

At the request of Mayor Javier Gonzales — who isn’t running for re-election — a special meeting of the City Council has been set for 3:30 p.m. Monday to discuss the election. He tweeted that he will introduce an emergency resolution to allocate $300,000 for voter education “to make sure we get this right.”

“I know the Secretary of State is ready to help us execute an election where voters rank their choice and assure our next mayor has the support of the majority of voters,” he wrote. The council also needs to make decisions on specific ranked-choice issues, such as how many candidates voters should rank — all candidates in a race, or just a top three, for instance.

FairVote’s Perez said her group is willing to assist in educating voters and candidates about ranked-choice by canvassing neighborhoods, phone banking and holding mock elections. She said FairVote will hold a “candidate and campaign team training” session on Dec. 9.