We broke the internet! 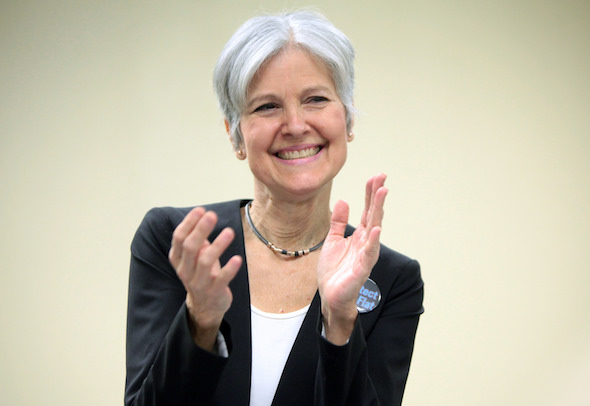 There’s only one way to say this – in the last week, our campaign has gone viral.

“Jill Stein” has been a trending topic on Facebook for at least 4 of the last 7 days, and over 90,000 new people have liked my Facebook page. Know what that means?

We got more new followers in the last week than Hillary Clinton!

At the rate we were growing we would have easily passed 100,000 new followers, if not for the issue, widely reported by many of our supporters, that sometime around Sunday Facebook limited your ability to invite friends to like my page.

Now, apparently this is standard Facebook procedure when a page is growing too rapidly, so don’t panic.

Instead, will you join me on Twitter so we can make sure our people-powered revolution keeps going viral?

Speaking of Twitter, we had an amazingly viral week on there too, trending for the first time ever and adding over 27,000 new followers in a week.

With all our success on social media, it’s clearer than ever that millions of Americans – dare I say a silent majority? – want better options for the highest office in our land than a warmonger or a corporatist.

If you’re not on Twitter yet, now is a great time to join while our Facebook page cools its jets. Twitter is not only a great tool to bypass the establishment gatekeepers and assert our Green views and values in the public discussion, it’s actually a social network where we can organize to set the trends that people talk about.

For example, when the GOP chose “Make America work again” as the theme for the 2nd day of the RNC, I bet they didn’t count on this being one of the top search results for their catchphrase: 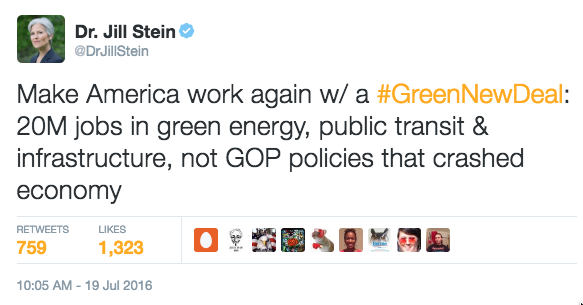 With some more reinforcements, we can use Twitter to start our own trends and completely reshape the conversation this year.

We can cut through the spin to talk about the things that matter, like canceling student debt, creating millions of green jobs, and ending wars for oil.

We can figure out ways to reach more people with real solutions, like pushing for open Presidential debates:

Twitter is fun, and it can be revolutionary too. The young activists who led the Tunisian revolution used Twitter as a tool in the struggle to bring real democracy to their country – why can’t we do the same?

Join me on Twitter today and let’s keep our revolution going viral!

If you want some guidance on how to get started on Twitter, join our Jill Stein for President Social Media Team group on Facebook and ask for help from the friendly people there.

Remember: the revolution will be tweeted.


PS. If social media just really isn’t your thing, and you’d rather write letters to the editor or go out to the farmers’ market with a signup sheet and flyers, we understand – sign up on our volunteer page today and tell us how you want to get involved!