STEIN: UN PROCESS HAS FAILED TO SAVE CLIMATE: PEOPLE MUST ACT 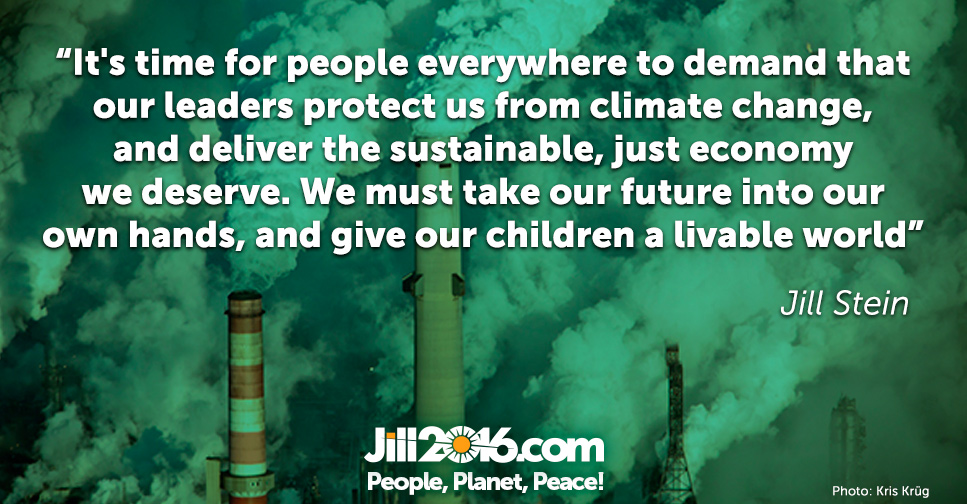 (PARIS) “The United Nations climate summit (COP21) has failed to take the action necessary to prevent global climate catastrophe,” said Green Party presidential candidate Jill Stein as she prepared to depart Paris, where she had participated in several COP-related events.

According to Stein, “The voluntary, unenforceable pledges being produced by COP21 are entirely insufficient to prevent catastrophic climate change. Scientific analysis shows that these pledges will lead us to 3 degrees Celsius global temperature rise – and that will be catastrophic.”

Stein noted that some of the pledges that are being touted as historic agreements could actually result in increases in emission of greenhouse gasses. “Plans are adopting deceptive measures of success, such as reductions in the amount of carbon emitted per unit of GDP. Countries are claiming to be making progress when they are not reducing their actual pollution by a single ounce. Mother Nature doesn’t respond to such games. It is the real quantity of pollution that determines whether we will destroy the climate or save it.”

“Despite the seriousness of the threat, some of the major polluters remain committed to protecting the fossil fuel industry rather than taking serious action. I include in that group the United States where President Obama’s promotion of the hydrofracking industry is leading to a spreading cancer of polluted groundwater and fracked gas pipelines. These pipelines, along with expansion of offshore oil drilling, have to be stopped if we are to make our required contribution to reducing greenhouse gas emissions.”

Stein also faulted the United States and the other industrial nations for failing to adequately fund transition and adaptation efforts by developing countries. According to Stein, “It is the US and major industrialized countries that are primarily responsible for climate change. We have both a moral and legal responsibility to compensate other countries for the damages we have inflicted and to enable them to find sustainable paths to development that will raise their standards of living.”

“We should also support the retargeting of our efforts toward the goal of limiting global temperature rise to 1.5 degrees centigrade rather than 2.0 degrees. It is now clear that many countries will experience catastrophic damage from the higher target.”

On Tuesday, Stein spoke to attendees at the Belong Forum in a program that included China’s deputy chief climate negotiator and other leading climate advocates. Stein noted that China has recently reoriented their economic planning to make climate protection a primary goal of its development plans. She also noted that as a result of the recent election, Canada has a government that is promising more vigorous support for climate protection.

“The United States bears primary responsibility for killing hope for a binding international treaty to avert climate catastrophe. I will return to the United States determined to work to loosen the grip of the fossil fuel industry on Congress and the White House. My country must begin to show the leadership the world needs at this critical moment in human history.”

“It’s time for the people of all nations – whose future is being sacrificed by the failure of COP21 – to demand that their leaders live up to their responsibilities for protecting us from climate change. We must insist that the polluting engines of planetary destruction be replaced by the clean, sustainable, just economy that we truly deserve. We must take our future into our own hands, and give our children a livable world.”