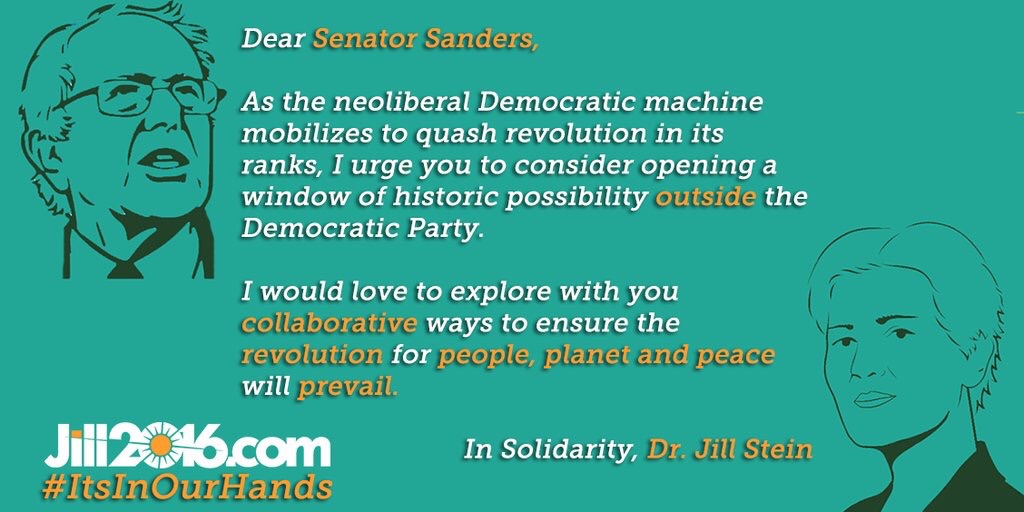 Jill Stein, who is seeking the Green Party nomination for President, said today that she had reached out to Senator Bernie Sanders following the NY primary to discuss ways they and their campaigns could work together to win a progressive political revolution in the United States.

Stein released a copy of a letter she sent yesterday to Senator Sanders.

I congratulate you on your historic campaign and the inspired grassroots movement for progressive change you have generated. I am writing to see if you would consider joining me in a conversation to explore possible collaboration, in this hour of unprecedented crisis and potential for transformative change. At a time when the American electorate is rejecting politics as usual in vast numbers, I invite you to join me in pushing the boundaries of that system to a place where revolution can truly take root.

You have given voice to the oppressed middle class, workers and the poor in a system that serves the 1% and throws the rest under the bus. You have engaged youth in the political process, and lifted up the needs of communities of color, seniors and so many others who have been locked out.

You’ve proven that in today’s rapidly changing America, a populist progressive agenda covered by the media and the televised debates can catch on like wildfire and shake the foundations of a political establishment that seemed invulnerable just a few short months ago.

The Democratic machine has launched an unjust attack on your campaign – from the NY Daily News hit job to Paul Krugman’s unfounded assault, the DNC’s efforts to minimize your debate exposure, and the near-unanimous endorsement of Clinton by Democratic elected officials and super-delegates.

It’s critical that the break-through work of your campaign not be thwarted by a corporate political machine.

In this wildly unpredictable election where the old rules are giving way one by one, can we think outside the box and find new and unexpected ways to synergize beyond obsolete partisan divides?

In this hour of unprecedented crisis – with human rights, civilization, and life on the planet teetering on the brink – can we explore an historic collaboration to keep building the revolution beyond the reach of corporate party clutches, where the movement can take root and flourish, in the 2016 election and beyond?

As the neoliberal Democratic machine mobilizes to quash revolution in its ranks, I urge you to consider opening a window of historic possibility outside the Democratic Party. I would love to explore with you collaborative ways to advance that effort and ensure the revolution for people, planet and peace will prevail. Please let me know if you’re interested in talking.

Read Jill Stein’s open letter to keep the revolution going, signed by Chris Hedges, Kshama Sawant, Marc Lamont Hill, Medea Benjamin, Richard Wolff, and many other leaders of the movement for an America that works for all of us!