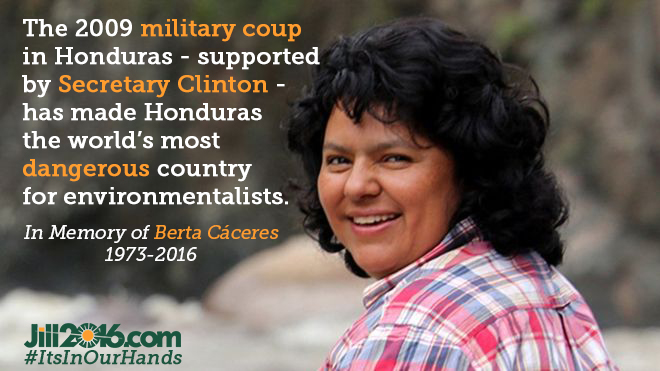 “On March 3, Berta Cáceres, Honduran environmental and indigenous rights activist, was assassinated in her home in La Esperanza, Honduras.

This is the latest in a series of murders that has made Honduras the most dangerous country in the world for environmental organizers.

I join the international human rights community in calling for the safe passage of Gustavo Castro, a Mexican environmental leader who was with Cáceres at the time of the assassination, from the Mexican ambassador’s residence in Honduras to his home in Mexico.

Until that happens, Castro’s life is at risk, as the Honduran government has barred him from leaving the country, while failing to guarantee his safety.

Underscoring the danger to Gustavo Castro’s life, the Honduran government failed to stop the murder on March 15 of Nelson García, another active member of Cáceres’s organization, after García opposed the violent eviction of an indigenous Lenca community by Honduran security forces.

Activists are frequently assassinated in Honduras and their murderers rarely punished, a situation exacerbated by the 2009 military coup against democratically-elected President Manuel Zelaya. Though widely condemned by the international community, the coup was tacitly supported by the US government, specifically Secretary of State Hillary Clinton, which Berta Cáceres herself pointed out.

Hillary Clinton says that she supports “free markets and free people,” but her record is full of decisions that put corporate profits ahead of democracy and human rights. This approach to foreign policy, which calls to mind Clinton confidantes like Henry Kissinger, is not only unjust—it is also against the interests of the American people.

Support for invasions, coups, and abusive regimes is at the root of refugee crises like the one we see at the US southern border. Such support also inflames anti-American feelings and destabilizes entire regions, making it much more difficult to solve international problems like the raging drug war violence in Central America.

My campaign stands for a different foreign policy, one based on international law, diplomacy, and human rights. We will never sacrifice the principles of democracy and self-determination to the short-term interests of multinational corporations, as has happened far too often in recent history with disastrous consequences. I will remember Berta and Nelson, and will do my best to continue their struggle for people, planet, and peace over profit.”

The murder of Berta Cáceres on March 3, 2016 is the latest in a series of murders that has made Honduras the most dangerous country in the world for environmental organizers, according to a report by Global Witness. Cáceres won the world’s leading environmental award in 2015, the Goldman Prize, for waging a grassroots campaign that stopped the Agua Zarca dam, which would have cut off the supply of water, food, and medicine for hundreds of indigenous Lenca people.

These killings are not random occurrences. The too-frequent murder of Honduran activists, and the fact that their murderers go unpunished over 80% of the time, can be traced to Honduras’ military, which colludes with powerful interests to suppress organized dissent.

We see the same impunity at the national level. In 2009, Manuel Zelaya, the democratically elected Honduran president, was overthrown in a coup and sent into forced exile by the military. Although the coup and the ensuing government were condemned as illegal by the Organization of American States, the European Union, the United Nations, and other international bodies, the US government under President Obama and then Secretary of State Hillary Clinton refused to condemn it as a military coup, which would have ended US non-humanitarian aid to the new regime.

In 2014, Berta Cáceres herself pointed out the complicity of the US government and Clinton specifically: “Hillary Clinton, in her book Hard Choices, practically said what was going to happen in Honduras. This demonstrates the meddling of North Americans in our country. The return of the president, Mel Zelaya, became a secondary issue. There were going to be elections in Honduras. And here she [Clinton] recognized that they didn’t permit Mel Zelaya’s return to the presidency.”

As Cáceres stated, Clinton herself discloses in her book that she had no intention of restoring the elected President Zelaya to power: “In the subsequent days [after the coup] I spoke with my counterparts around the hemisphere, including Secretary Espinosa in Mexico. We strategized on a plan to restore order in Honduras,” Clinton wrote, “and ensure that free and fair elections could be held quickly and legitimately, which would render the question of Zelaya moot.”

These supposedly “free and fair elections,” however, were to occur with Zelaya banished from Honduras. So Clinton tacitly supported the coup, despite being informed by former US ambassador to Honduras Hugo Llorens that it was without a doubt “illegal and unconstitutional.” While Clinton did not state why she supported the coup, we do know that Zelaya’s push for a large increase in the minimum wage was strongly opposed by Chiquita Brands and Dole Food Company, as it threatened their profits in Honduras, as well as potentially throughout the region.