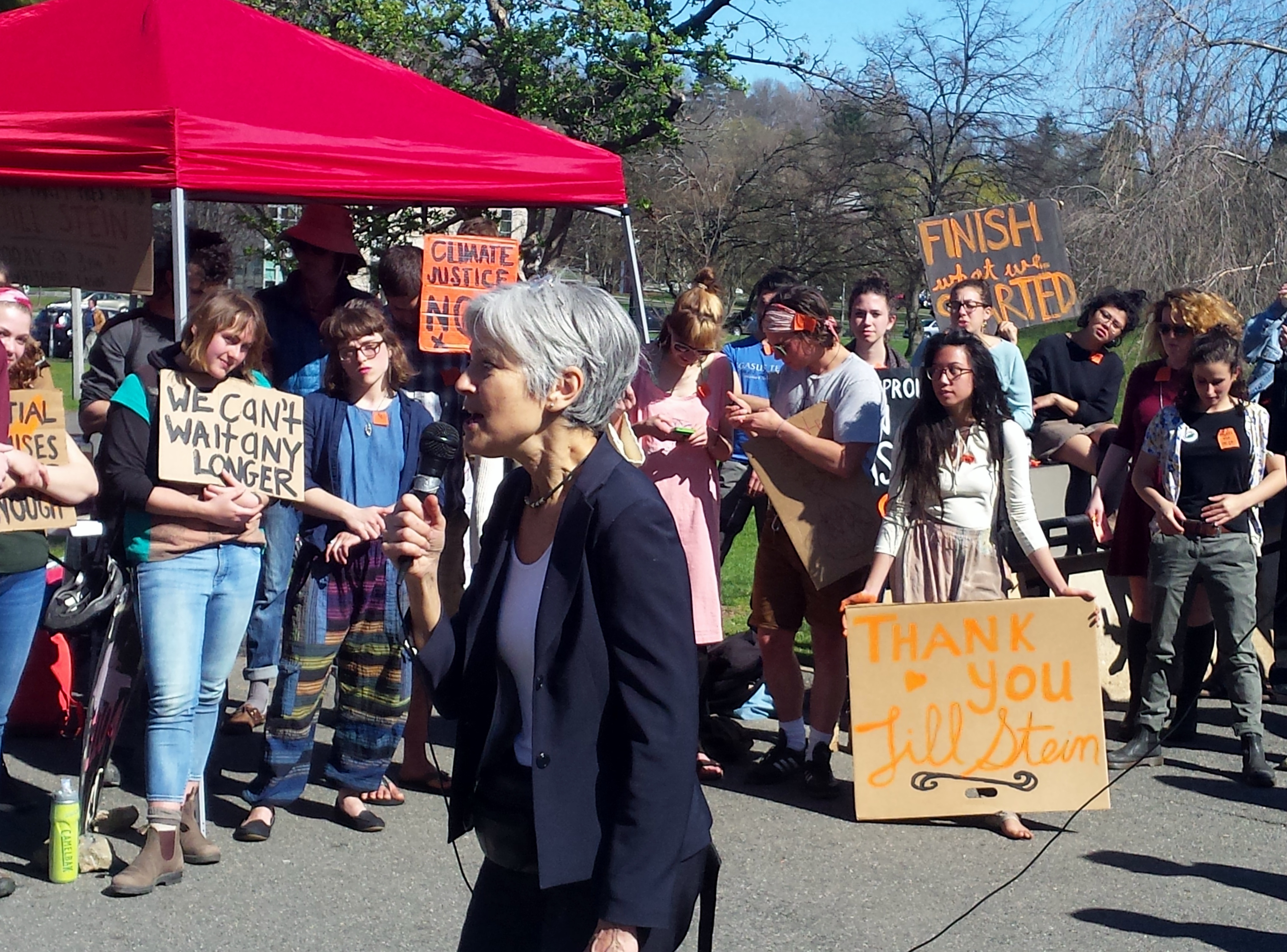 Green Party presidential candidate Jill Stein spoke at a rally hosted by the University of Massachusetts Campaign for Fossil Fuel Divestment outside of the Whitmore Administration Building Wednesday.

Stein said she was honored to be present at the rally held by Divest UMass, which is demanding the divestment of UMass investments from the top 200 publically traded fossil fuel companies, and said that all institutional change emerges from social movements.

“It has always taken the younger generation to see the world as it really is,” said Stein, a physician who was the Green Party’s presidential nominee in the 2012 election. “It takes the fresh vision and vitality and unstoppable vision you have to really move us forward.”

Stein said the emergence of campaigns supporting the divestment of their universities from fossil fuel companies at schools such as UMass, Harvard and Columbia represents the concerns held by young people about the effects of climate change – which Stein said include droughts, superstorms and rising sea levels.

Stein said the time to deal with climate change is extremely limited and that it is not too much to ask for colleges and universities to divest 100 percent of their investments in fossil fuel companies.

Referring to the United States as a whole, Stein said the country also needs to divest 100 percent of its economy from fossil fuels, and said as president she would call a state of emergency to deal with climate change.

Stein evoked the aftermath of the Pearl Harbor attacks of 1941, which resulted in the declaration of a state of emergency and the United States transitioning to a wartime economy in six months.

The transition of the American economy to one powered entirely by wind, water and solar energy by 2030 would be a top priority in Stein’s presidency, and would be assisted by bans on fracking and the exploration of public lands for oil and natural gas.

“This is not a sacrifice, this is a step forward to a better world that works for all of us,” Stein said.

Stein referred to her proposed economic policies for the United States as a Green New Deal that would create jobs through increased investment into clean energy and the restoration of American infrastructure.

Stein added that depending on clean energy rather than fossil fuels would make “wars for oil obsolete,” and that the United States would be able to cut the country’s military budget by 50 percent when global bases to secure natural resource transportation are unnecessary.

“Why don’t we lead the way to global demilitarization?” Stein asked.

The cancellation of all student debt was also promoted by Stein, who said that the president can control this by appointing the head of the Federal Reserve.

“If we bailed out the crooks who crashed the economy, would you say it’s time to bail out the young people who are victims?” Stein asked to an applause from the roughly 100 people attending the rally.

Nina Hazelton, a UMass alumna who graduated in the spring of 2015, told attendees that Stein was not describing radical ideas and all systematic change must start with social movements.

Hazelton thanked the activists present for helping the campaign, while saying that the UMass administration has not met their demands for a time-bound commitment to divesting from fossil fuels.

“Tomorrow, (UMass system) President Marty Meehan is coming to UMass Amherst because of us,” Hazelton said. “We need you all to show up at six o’clock to make sure that he makes a public commitment.”

“If Bernie (Sanders) doesn’t get the nomination I will most definitely be voting for Jill,” Mucci said.

UMass student trustee Emily O’Neil, a senior studying economics who supports the divestment campaign, said she hopes there is high turnout from supporters of the campaign when Meehan visits UMass, and that the president’s private meeting with Divest organizers is productive.

“I’m really happy that folks are still out here and that momentum is still going on this issue,” O’Neil said.

Stein’s speech was followed by a performance from folk singer Ben Grosscup from Greenfield.