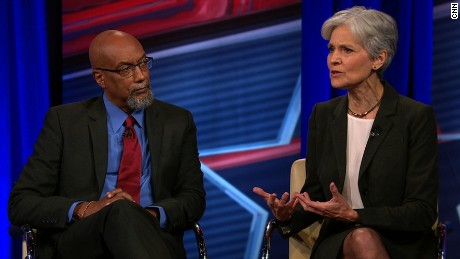 The Green Party Presidential ticket of Jill Stein and Ajamu Baraka released a statement today in response to recent controversy surrounding Donald Trump’s warnings that the presidential election may be rigged, as well as Democrats’ warnings that Russian hackers may try to interfere with the vote.

“Hillary Clinton and Donald Trump are raising unprecedented doubts – from very different directions – about the reliability of the upcoming vote count,” said Jill Stein, Green Party Presidential candidate. “Trump conjures up fictional armies of people engaged in ‘voter fraud.’ The mainstream media and the Democrats are obsessed with “Russian hackers.” In the meantime, President Obama scoffs at the notion of election rigging. But in fact, there are serious election integrity issues in the US that we need to address. Just as important, the system is rigged to ensure that the Democratic and Republican parties continue to dominate while political competition is effectively barred.”

“The rigging of our political system to prevent competition begins with anti-democratic and discriminatory ballot access laws that force parties like the Greens to gather massive numbers of signatures, often much more than the establishment parties need, simply to appear on the ballot. After we spend our resources getting on the ballot, the media gives us less than 1% the coverage given to the establishment candidates, while constantly reinforcing the narrative that political competition is futile or worse. This marginalization leads to low poll numbers in polls that significantly undercount young people and independents, which happen to be the demographics that are most likely to vote Green. Then these poll numbers are used to justify locking ballot-qualified candidates out of debates and media coverage. This is clearly a self-perpetuating cycle that keeps the establishment parties in control, even when voters are ready to revolt in disgust against the candidates they’ve chosen,” said Stein. “This is a failing system badly in need of reforms such as ranked choice voting, an improved voting system that is on the statewide ballot in Maine.”

Social scientists have already debunked Trump’s myth of voter fraud. The Brennan Center for Justice at New York University stated that “it is more likely that an individual will be struck by lightning than he will impersonate another voter at the polls.”

“People who worry about the integrity of our elections should be more concerned with the well-documented suppression of minority and poor voters by partisan secretaries of state and other election officials,” said Ajamu Baraka, Green Vice Presidential candidate. “Since the 2000 presidential election, a variety of techniques have been employed to disenfranchise large numbers of eligible voters, including voter ID laws, the deliberate purging of registered voters, the elimination of voting sites in minority neighborhoods and on college campuses, and intimidation at the polls.”

In their full statement, Stein and Baraka pointed to documented evidence of major elections tainted by voter suppression, voter roll purges, and other troubling issues.

“A Stein/Baraka administration will propose federal legislation providing for universal national voter registration and election procedures,” said Stein. “We call for immediate measures to help protect the vote on November 8, including:

It is vital to the integrity of our elections and our democracy that every vote be counted. We call on all parties and presidential campaigns, including both Trump and Clinton, to join our call for verified election results today.”If you have any voting problems, please visit: jill2016.com/votingproblems