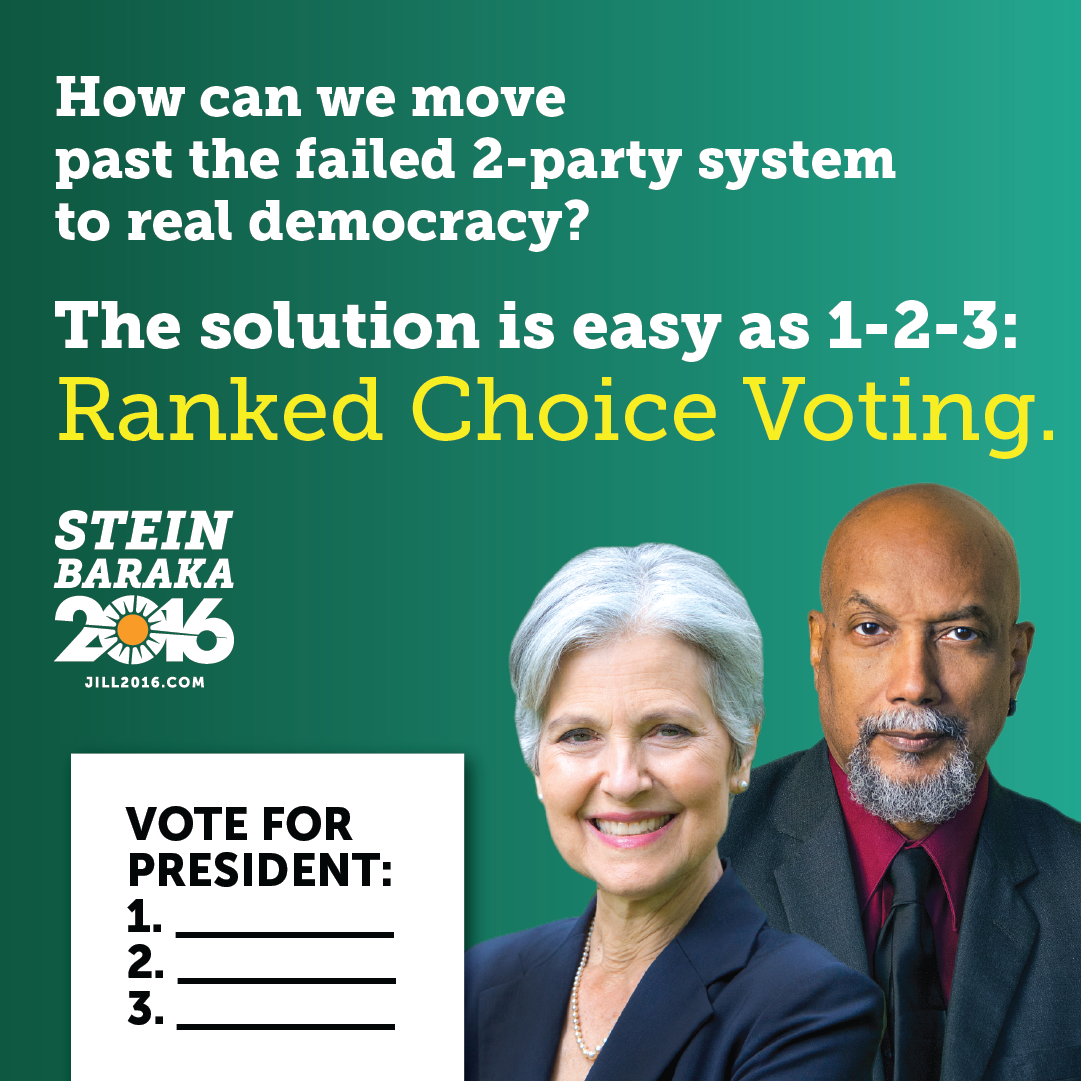 Jill Stein and Ajamu Baraka, Green Party candidates for President and Vice President, called today for Americans of all political persuasions to come together to support ranked choice voting. Ranked choice voting, which is already used in cities across the country, is on a statewide ballot for the first time in Maine.

Stein noted: “Voters across America are frustrated by our broken voting system. Although the Democratic and Republican parties dominate our government at every level, 57% of Americans polled this year agreed that a new major party is needed because the establishment parties do such a poor job of representing us. Yet even after these parties nominated the most unpopular presidential candidates in history, most voters currently plan to support them, although an incredible 57% are basing their choice primarily on fear of the opposing candidate, according to a recent poll.

The problem is that our current voting system is forcing many people to feel they must vote against the candidate they dislike the most rather than for the one they like the most. Ranked choice voting is a solution to this problem, and Maine is leading the charge to give voters more choices in our elections.”

“Ranked choice voting would give you the power to rank candidates in the order you prefer. It’s as simple as 1-2-3,” Stein continued. “Counting the votes is equally easy. If any candidate receives a majority of the votes, they win. Majority rule. But if there is no majority winner, then the candidate with the least number of first preference votes is eliminated. Even if their first choice didn’t win, those voters did not “waste” their votes, because they already indicated their second choice. That’s why it is sometimes called ‘Instant Runoff Voting.’”

Stein and Baraka touted Ranked Choice Voting as a easy solution to the alleged “spoiler” effect that independent candidates are routinely blamed for, as well as the dominant two-party politics of voting for the “lesser evil,” which has presented American voters in this election cycle with the two most disliked and distrusted candidates in the nation’s history.

“It also makes politics more civil and positive, because candidates and their supporters try to find common ground to win second-choice votes from rivals, instead of fighting tooth and nail for every single vote. Ranked choice voting itself has built strong support across party lines, with supporters including Republicans and Democrats like John McCain, Barack Obama, and Bernie Sanders as well as many Greens, Libertarians, independents and others.”