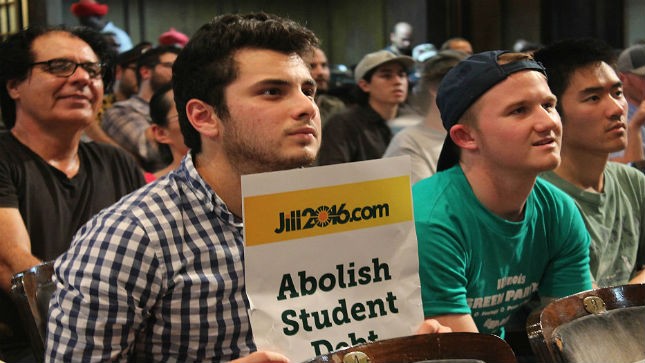 Young people are planning to break from the two-party system in unprecedented numbers this year. Their discontent is real: one May 2016 poll showed 91 percent of voters under age 29 wanted an independent challenger to Hillary Clinton and Donald Trump.

Media pundits have reacted harshly toward these young rebels, especially those supporting me and Ajamu Baraka, who as progressive Green candidates are constantly framed as taking votes from Clinton.

But instead of attacking our young voters, why not ask what’s motivating them to vote outside the two-party box? They’re well aware of the conventional wisdom that they should vote for the “lesser evil,” which the media has beaten into them for months. What few pundits have been willing to admit is that for many young people, voting Green is not a whim but a well-considered decision.

Millennials are disillusioned with politics and desperate to change it. For many, WikiLeaks exposing how the Democratic Party sabotaged Bernie Sanders confirmed their suspicions that the political system is rigged. They see Clinton as the embodiment of a political establishment that serves the economic elite, and they reject Trump’s sexist, racist behavior and regressive platform.

Gary Johnson’s vision of unrestricted capitalism doesn’t compute for millennials worried about climate change and income inequality. Only the Greens offer a political vision aligned with the younger generation’s hunger for real change.

On critical issues like education, debt and jobs, millennials see the Greens as the one party taking their concerns seriously. Since the 2008 financial meltdown, millions of young Americans have been stuck in a low-wage, insecure economy in which good jobs and affordable healthcare and education are often out of reach.

We are tackling their concerns with programs to guarantee jobs, education and healthcare to all. Our flagship proposal is a Green New Deal to create millions of jobs in the transition to a sustainable economy.

Skyrocketing tuition and student debt, now at $1.3 trillion for 43 million indebted Americans, are causing many young people to question whether they can afford higher education. This is tragic when compared to the many countries around the world that offer tuition-free higher education to give their young people a secure start in life.

Our platform calls not only for tuition-free public higher education, but also for bailing out students, like our government did for Wall Street. This would free tens of millions of young Americans from predatory student loan debt, allowing them not only to realize their own potential but to put their training, ingenuity and earnings to work as full participants in the real economy.

Even under the Affordable Care Act, too many young people are unable to afford decent healthcare. A single-payer Medicare for All system, as advocated by the Greens, would ensure healthcare for all as a right. Roughly $500 billion in annual savings from eliminating the bureaucracy of for-profit insurance would be more than enough to expand quality healthcare to everyone.

Skeptics ask: how can we afford it all? We can start by taxing Wall Street and cutting military spending. This message, considered out of bounds by the corporate-funded establishment parties, is resonating with young people who question why our tax dollars go to bomb other countries instead of building ours. Our energy plan aims to render obsolete the Middle East wars for oil that have cost us trillions, while yielding only failed states, mass refugee migrations and worse terrorist threats.

Millennials share a growing consciousness of the interconnectedness of social justice and human rights with economic and environmental justice. Young people support legalizing marijuana not just for personal freedom but also to end racist mass incarceration caused by prohibition.

The Black Lives Matter and immigration justice movements are warming to the Greens’ consistent support for human rights. Calls are growing to join together in a broad movement for justice, rather than organizing into single-issue groups that are easy to divide and conquer.

Committed to using our campaign’s spotlight to lift up the struggles of front-line communities, Ajamu Baraka and I have joined Native Americans at Standing Rock protesting the Dakota Access Pipeline, while no other candidate has taken a stand against the militarized repression of indigenous people trying to protect their water.

These sharply contrasting approaches to Standing Rock illustrate another reason why our campaign has attracted so many passionate young supporters: authenticity. We don’t hide from talking about real problems and real solutions, anchored in the Greens’ core principles of grassroots democracy, nonviolence, social justice and ecology.

Compared to Trump’s opportunistic demagoguery or the cynical manipulation of the Clinton machine, many young people prefer a real, unscripted person who isn’t afraid to answer their burning questions in social media livestreams.

In fact, millennials who plan to vote Green know that if we are ever to break free from the two-party trap, the time to start building an alternative is now. Word is spreading that at least 5 percent of the national popular vote would qualify the Greens for up to $10 million in public funds for the 2020 election, and win ballot lines throughout the country so thousands more down-ballot Green candidates can run.

Young Green voters are talking about a national push for electoral reforms like ranked choice voting to end the downward spiral of fear-based voting. While millennials may vote Stein/Baraka dreaming of a Green White House, they know every vote is an investment in building a lasting movement for people, planet and peace over profit.

Dr. Jill Stein is the Green Party candidate for president.