Condemning terrorism in Brussels, Stein calls for an end to US/Saudi arms and funds for terrorist groups 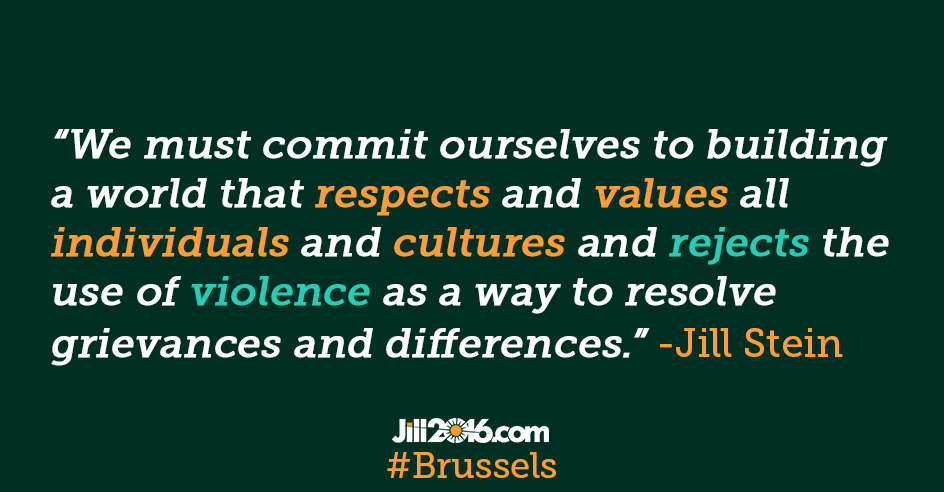 I join the world in condemning the horrific acts of violence and devastating loss of innocent lives today in Brussels. Likewise we deplore the recent civilian slaughter in Turkey as well as the Middle East and Africa. In the first three months of 2016 alone, there have been over 100 acts of terrorism that have killed or injured innocent civilians.

All life is precious. Every person killed is a tragedy for their loved ones that touches their communities and the broader world.

We must commit ourselves to building a world that respects and values all individuals and cultures and rejects the use of violence as a way to resolve grievances and differences.

Responding to murderous acts of violence with more violence, curtailments of civil liberties, harassment of refugees and draconian mass surveillance is the response the terrorists hope to provoke.

As I have stated before, the terrorist attacks are clearly a product of the exploding violence in the Middle East over the past 15 years. Governments have been destabilized and weapons have poured into the hands of extremists. Over a million lives, largely civilians, have been lost in Iraq alone. That carnage enables terrorists to mobilize mass recruiting and rationalize their own horrific, despicable acts. In the last decade, the US-led assaults to achieve regime change have created failed states in which ISIS has flourished. In the process, the US has supplied vast stocks of weapons to the Middle East, including nearly $100 million in weapons sales to Saudi Arabia in recent years.

It’s time for a new approach – a Peace Offensive that can end the wars for oil and stop ISIS in its tracks.

The US and its allies created and maintain the life support systems of ISIS. We can shut them down. The Saudis must stop funding them. Turkey must close its border to the jihadi militias that reinforce them. Iraq and our other allies must stop buying their oil on the black market. We must cut off the flow of weapons to ISIS by initiating a weapons embargo to the Middle East, starting with our own massive supply of weapons to the region.

After $6 trillion dollars, tens of thousands of US soldiers killed and maimed, over a million people slaughtered in the Middle East – it is time to admit that America’s war on terrorism has catastrophically failed and that a different approach is needed.

We cannot simultaneously fight terrorism with one hand, while we and our allies are funding and arming terrorism with the other. The path to real security and the defeat of terrorism is a foreign policy based on international law, human rights and diplomacy.