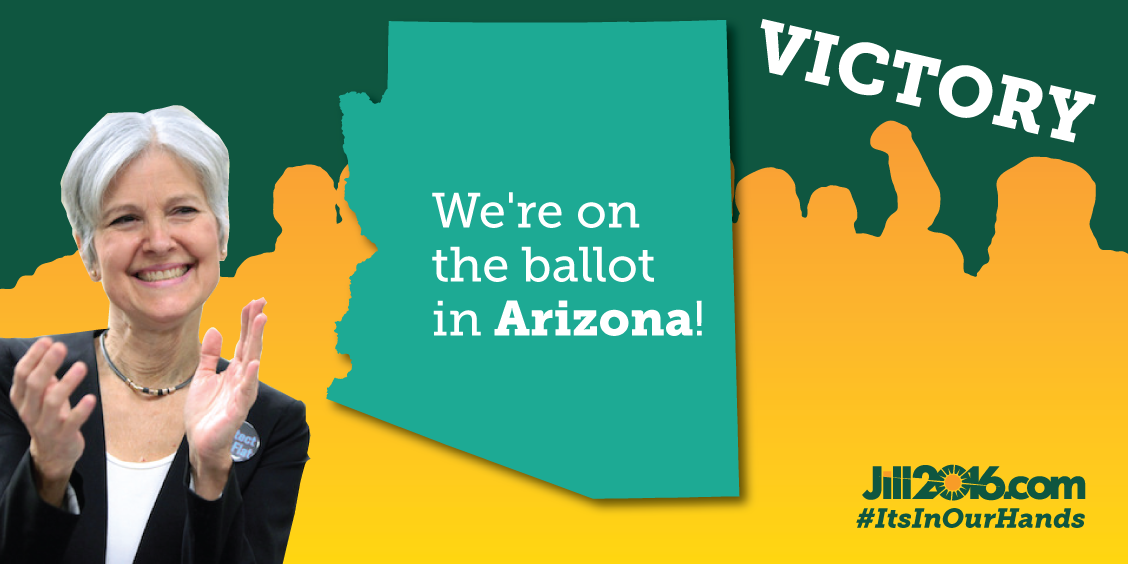 State officials had previously ruled that the Green Party had missed a deadline to name its presidential electors by June 1st – even though the Green Party has not yet held its Presidential nominating convention – and therefore the name of presumptive nominee Jill Stein would be struck from the November ballot.

Impractical rules such as the early deadline contribute to voter suppression and inhibit democracy. The Green Party resolved that if Arizona election officials tried to enforce the deadline, they would take the case to court, as a similar attempt by Arizona to keep the Libertarian candidate off the ballot in 1996 was thrown out by the courts.

Secretary of State Reagan agreed with Green Party officials that a June 1 deadline is unnecessarily early, coming months before a general election ballot is printed, and before all of the major-party nominating conventions. She vowed to ask lawmakers to alter this deadline in the coming years.

In a year in which voters have expressed a greater desire than ever for options outside the two-party system, this victory for voter choice in a state with a history of voter suppression takes on special significance for the Greens.

“This is what it looks like when a political party stands up against voter suppression and for voters’ rights,” said Rick Lass, Ballot Access Coordinator for the Jill Stein for President campaign. “We invite all Arizonans who are ready to reject the lesser evil and join our fight for the greater good to register with the Arizona Green Party and get out the vote for Jill Stein in November.”