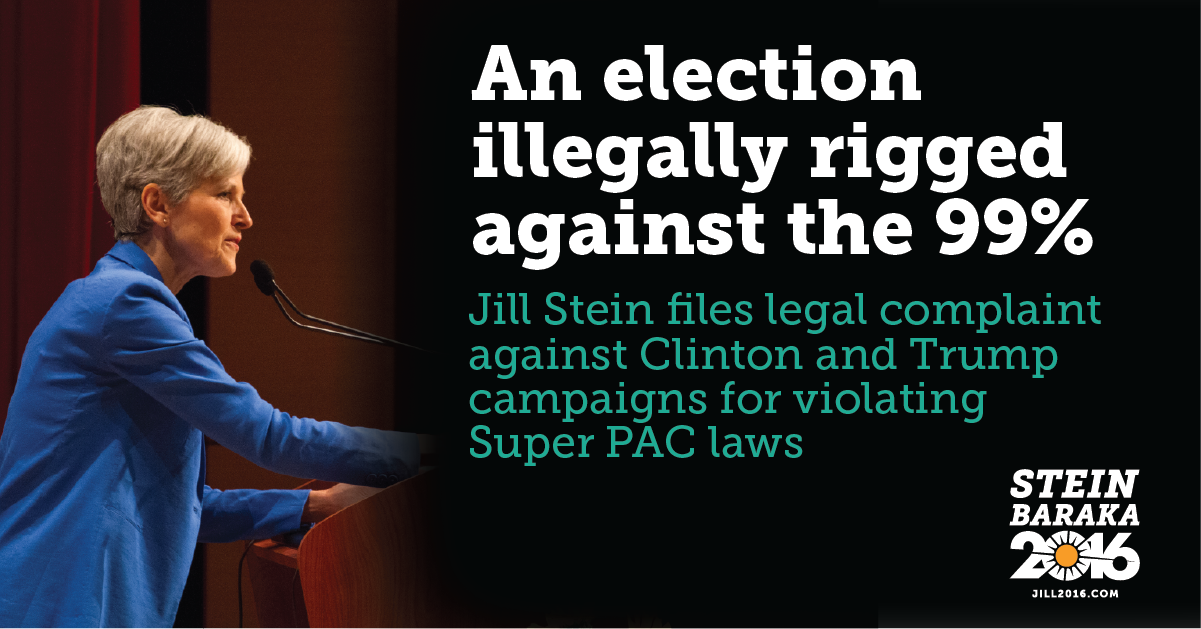 The Stein/Baraka campaign, which like all Green campaigns has pledged not to accept support from corporate lobbyists or Super PACs, is filing the complaint as the latest step in the Greens’ longstanding commitment to eradicate the corrupting influence of big money in politics.

Super PACs, which were established by the Citizens United v. FEC Supreme Court ruling, are political advocacy groups known as “dark money” groups because they allow for virtually unlimited and unregulated contributions. However, one of the few rules is that political campaigns, which have stricter campaign finance regulations and disclosure requirements, may not coordinate with Super PACs on paid activities. Such coordination would be functionally equivalent to an in-kind donation to the campaign from these dark-money groups.

In other words, coordination with Super PACs would allow political campaigns to direct the spending of unlimited amounts of money from undisclosed sources using Super PACs as front organizations, completely destroying the pretense that there are any rules for money in politics at all.

This complaint could bring about an end to the illegal collusion between super PACs and campaigns, whereby massive amounts of undisclosed money from corporations and the super rich pour into campaigns in violation of federal election campaign limits.

The Green Party has long advocated for a Constitutional Amendment to overturn the Citizens United decision, affirming that money is not speech, corporations are not people, and rights belong to living people, not corporations or other legal entities created to concentrate wealth and power in the hands of a few.

The Stein/Baraka campaign and the Green Party believe that ever-increasing amounts of money in politics are a major reason why the establishment parties have become so wildly out of touch with the needs of the American people. This complaint against the Trump and Clinton campaigns is just one step towards getting the big money out of politics so we can get the people back in.