AFTER IOWA, BUILDING AN UNSTOPPABLE REVOLUTION 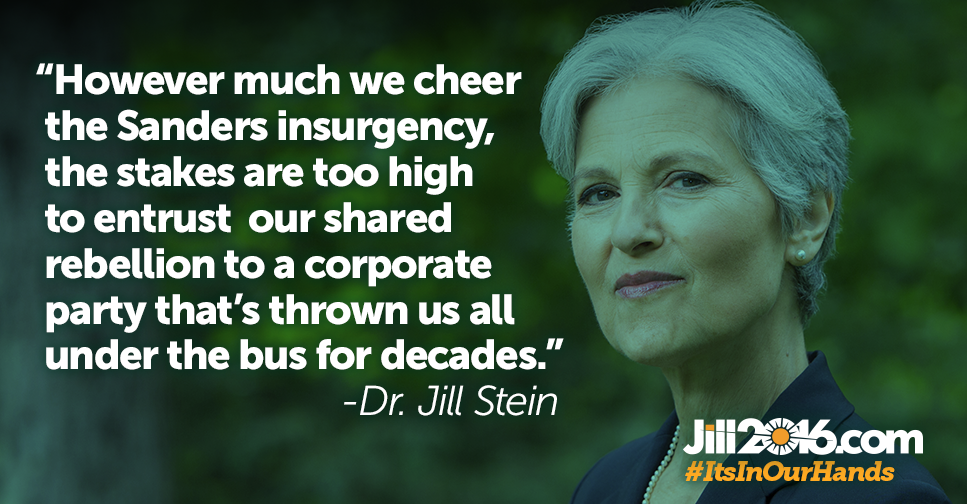 On Monday night the Democratic Party dodged a bullet, stopping the Sanders surge just short of beating the Clinton machine and the party establishment.

The question going forward is this: How long will a campaign calling for revolution be tolerated by a counter-revolutionary party?

Whether you see our campaign as Plan B for Bernie supporters when the empire strikes back, or Plan A, because we need a movement that’s independent of the corporate interests that dominate the Democratic Party top to bottom…. we have to ensure this revolution lives on.

Because we must build an America, and a world, that works for all of us. And we need your help.

Sanders’ showing, while remarkable, does not signal a fundamental change in the Democratic Party – whose elected officials overwhelmingly support Hillary Clinton.

So this is certainly not the time to pledge allegiance to a Democratic Party that at best is pushing for for a military budget that’s bankrupting us financially and morally; for a war on terror that is creating more terror; for auditing the Fed instead of nationalizing it; for school privatization and high stakes testing instead of fully funding public education; for the continued enslavement of a generation in predatory student debt; for perpetuating the “deep state” in the CIA, NSA, State, and Homeland Security; for allowing the military-industrial-security complex to dictate foreign policy; and for supporting human rights atrocities by Saudi Arabia, Israel and Egypt.

If our revolution is to survive, it must challenge the unelected private power of the corporations, the military and the national security state – the authoritarian iceberg hiding beneath the tip of an elected president and congress.

However much we cheer the Sanders insurgency, the stakes are too high to entrust our shared rebellion to a corporate party that’s thrown us under the bus for decades, and sabotaged every insurgent candidate since George McGovern’s anti-war campaign won the Democratic Party nomination in 1972.

Please help make this rebellion as deep and enduring as it must be, in a revolutionary party that will support this revolt, not sabotage it. Our campaign will provide a home for rebellious voters when the corporate parties cast them out.

Please consider making a contribution today to ensure our revolutionary voices will be on the ballot for every American in November.

In the words of Frederick Douglas, “Power concedes nothing without a demand. It never has. It never will.” We must be that demand. The corporate political parties, funded by predatory banks, fossil fuel giants and war profiteers, cannot do the job.

We are in this for the long haul to build a world that puts people, planet and peace over profit. With a party that has never taken a dime of money from corporations, lobbyists or super PACs, and never will.

If you want to help me reach the millions of Americans being crushed by politics as usual, please contribute as much as you can today.

Thank you for all that you do to give voters a real choice, for an America and a world that works for all of us.