Originally published October 25 at The Hill 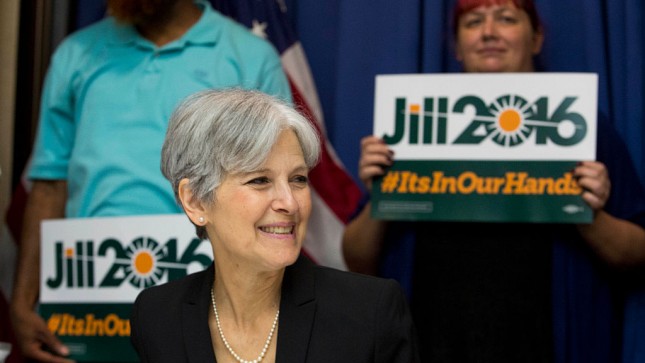 We were treated to a double “October surprise” on Friday, Oct. 7.

Millions of voters have figured out that the two major parties don’t represent them. They’re right. It’s not a two-party system, it’s a two-party racket.

They’re frustrated with a choice that, we’re told, is limited to two nominees with deep disapproval ratings. Voter dissatisfaction is reflected in polls that show broad support for a choice of more than two on the ballot.

Despite such sentiments, Democrats are scolding Green Party candidates: “This isn’t your year. We must defeat Trump.”

Meanwhile, we’re seeing indications that Clinton is heading towards a solid win, as the Trump campaign sinks deeper into disgrace.

2016 might turn out to be the safest year ever to vote Green, right? No, say Democrats.

Dems will never admit it’s a good time to go Green. They want a field permanently limited to two parties of war and Wall Street.

To understand what we’ve lost under the two-party racket, compare the cringeworthy Clinton-Trump debates with Green nominee Jill Stein’s rebuttals.

Stein addressed issues that were either touched on superficially or absent from the bipartisan bicker-fest. She proposed solutions — especially the Green New Deal. Progressive ideas, the kind advanced by Bernie Sanders in his call for political revolution, are effectively censored in the debates.

Marginalization of alt-parties in the late 20th century is one of the unmentioned reasons for the triumph of the right wing in both major parties. It explains the disappearance of big progressive ideas like FDR’s New Deal and LBJ’s Great Society.

The Green New Deal is a vision of how we can improve the lives of millions of people and rescue the planet from climate chaos.

Today’s Democrats give us no such vision. All they’ve offered is modest reforms, ideas that pretended to be progressive but aren’t (e.g., Obamacare, originally Romneycare), and slogans like “Change We Can Believe In.” The vision Hillary Clinton evokes is “I’m not Trump.”

The two-party racket is incapable of dealing with the crises of the 21st century: climate change; creeping corporate oligarchy and economic inequality; the national-security/mass-incarceration state; endless war.

These crises promise an era of deteriorating quality of life, increasing personal debt, eroded rights and freedoms, lawless militarism, and social breakdown. The danger they pose can be compared with the rise of totalitarian states and the Cold War’s nuclear menace during the 20th century.

Bill McKibben of 350.org has called for a global war on global warming. Clinton’s support for drilling and fracking, promotion of free trade deals, and contributions from Big Oil tell us she’ll fight a border skirmish.

Stein isn’t the only alt-candidate on the ballot in 2016. Libertarian Gary Johnson advocates some important ideas: ending belligerent foreign policies, the war on drugs, the war on whistleblowers and civil liberties, and mass incarceration.

But many of his positions are so regressive they’d trigger a new robber-baron era: deregulation of corporations; dismantling of Social Security, Medicare, public education, and programs to lift people out of poverty; support for the TPP.

Libs are right to fear Big Government. But the remedy must be decentralization of civic and economic power and guaranteed human rights, freedoms, and well-being.

Americans aren’t free when they’re trying to survive a foreclosure, an unpayable student loan debt, a costly medical emergency, the loss of a home because of flooding. That’s what Greens understand and Libertarians don’t.

Through their Power to the People Plan, Stein and running mate Ajamu Baraka are promoting Green agenda nationally. By achieving ballot access in 44 states, they’ve enabled many more down-ticket Greens to run in the next few years.

If they draw more than 5 percent, the next Green presidential campaign will be eligible for millions in FEC funds, allowing Greens to compete more effectively. Such funding is essential for a party that rejects corporate money. Movements for change can’t be limited to political parties. Occupy Wall Street, Black Lives Matter, the climate justice movement, the calls to end corporate personhood and the school-to-prison pipeline exist outside of the electoral realm. But political parties can give movements a voice in government.   This year’s attention for the Green Party has raised the possibility of a permanent alternative to the two-party racket. If that’s not enough of a reason to go Green in 2016, here’s one more: In 2020, the Democratic and Republican nominees might be even worse.   McLarty is media coordinator for the Green Party of the United States (http://www.gp.org). He lives in Washington, D.C.