A call to progressives: Help build and own the Green Party

By David Cobb
Originally published at The Hill 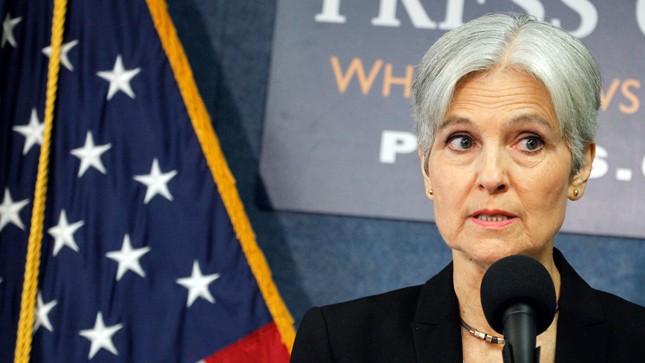 It hasn’t been an easy election year for progressives. Many were crushed when Bernie Sandersfailed to pull off a historic upset of establishment pick Hillary Clinton, then outraged when leaked emails proved what they already knew — that the Democratic Party elite had conspired against Sanders’ political revolution the whole time.

But with the racist, sexist billionaire buffoon Donald Trump leading the GOP, many progressives have resigned themselves to pulling the lever for Clinton in an attempt to keep Trumpismo at bay. But before you accept yet another election year of “lesser evilism,” allow yourself to consider investing your vote in the Green Party.

In a 2006 interview with the editorial board of the Jewish Press in Brooklyn, then-Senator Hillary Clinton shared her opinion on the recent election in Palestine: “I do not think we should have pushed for an election in the Palestinian territories. I think that was a big mistake,” said Sen. Clinton. “And if we were going to push for an election, then we should have made sure that we did something to determine who was going to win.”

Eli Chomsky, an editor for the Jewish Press, was shocked that “anyone could support the idea — offered by a national political leader, no less — that the U.S. should be in the business of fixing foreign elections.” But upon a close examination of her record, Clinton’s casual suggestion of rigging a Palestinian election perfectly illustrates her political style: amass power above all else, principles be damned — and no matter who gets hurt.

As a U.S. senator, Clinton supported the Iraq War. As Secretary of State, she was a consistent voice for military intervention in the Obama administration. Clinton pushed for the bombing of Libya, and publicly laughed about the lynching of Muammar Gaddafi as Libya descended into bloody chaos. Even while Libya was burning, she pushed Obama to arm rebels in the Syrian civil war, despite the likelihood that these weapons would end up in the hands of terrorists including ISIS.

Indeed, Clinton seems to have few scruples about arming the Middle East to the teeth, having approved record weapons sales to US-allied dictators, many of them, like Saudi Arabia and Qatar, major donors to the Clinton Foundation. She now calls for a no-fly zone in Syria, which she admitted in a speech to Goldman Sachs would “kill a lot of Syrians”. Not only that, it would risk armed confrontation with Russia that could escalate from a Mideast conflict to a nuclear showdown.

And Clinton’s willingness to fix elections and overthrow governments isn’t limited to the Middle East, either. A 2009 military coup against the progressive, democratically elected Honduran President Zelaya was condemned by the Organization of American States, the European Union and the United Nations, but supported by Clinton and the Obama administration.

As Honduras devolved into violence, becoming the world’s most dangerous country and a killing field for environmental activists, a wave of Honduran refugee children began spilling over the U.S. border. In response, Clinton called on Obama last August to deport the children, many of whom were seeking asylum, to “send a message to families in Central America.”

Clinton’s domestic policies are just as concerning. While her campaign has tried to win over  former Sanders supporters by pointing to what they call the most progressive Democratic platform ever, their skepticism has been reinforced by leaked emails revealing Clinton’s philosophy thatpoliticians need both a “public position” and a “private position” because “if everybody’s watching all of the back room discussions and the deals, then people get a little nervous.”

Her flip-flops on positions like trade, supporting free trade agreements like NAFTA and the Trans-Pacific Partnership but then deciding to oppose them in election years, are evidence that she will not fight the corporate agenda. Stated bluntly — she will champion Wall Street’s Agenda.

Given Clinton’s hawkish foreign policy, coziness with corporate elites, and general disregard for anyone who isn’t a Washington DC power player, what’s a progressive to do? In the words of Frederick Douglass “power concedes nothing without a demand.” A vote for the Green Party ticket of Jill Stein and Ajamu Baraka is not a protest vote — it’s a movement vote demanding real change.

The Greens are running on an impressively progressive platform including the Green New Deal, a program to halt climate change while creating full employment, as well as single-payer health care, tuition-free higher education, cancellation of student debt, a foreign policy based on international law and human rights, strong stands for racial justice, and on down the line in what adds up to a progressive’s dream platform.

Voting Green is a powerful move, showing that your vote can’t be taken for granted by politicians who don’t act on your issues. It also helps move the Green Party closer to 5% of the national popular vote, which would qualify the party for millions in public funding as well as ballot lines across the country.

This would take the Greens, the only party that refuses to take corporate money, to the next level in terms of ability to field progressive candidates at all levels of government to challenge the big money-dominated two-party system.

Throughout American history, big progressive changes like the abolition of slavery, women’s suffrage, Social Security and the 8-hour work day have been championed by alternative parties. A progressive alternative to the two-party system is becoming more viable as voters desperate for more choice push for ranked choice voting, an improved voting system that would remove any incentive to vote for the “lesser of two evils” instead of for the candidate you agree with most.

Another benefit of ranked choice voting: by making the “spoiler effect” obsolete, it would end bitter fighting among progressives who disagree on political strategy, and allow everyone to refocus their energy on advancing the causes we care about.

It’s time for progressives to reconsider the losing strategy of perpetually voting for lesser evil, and to make a push for a modern, multi-party system that could allow progressives to start making gains like never before.David Cobb is the manager of the Jill Stein for President campaign