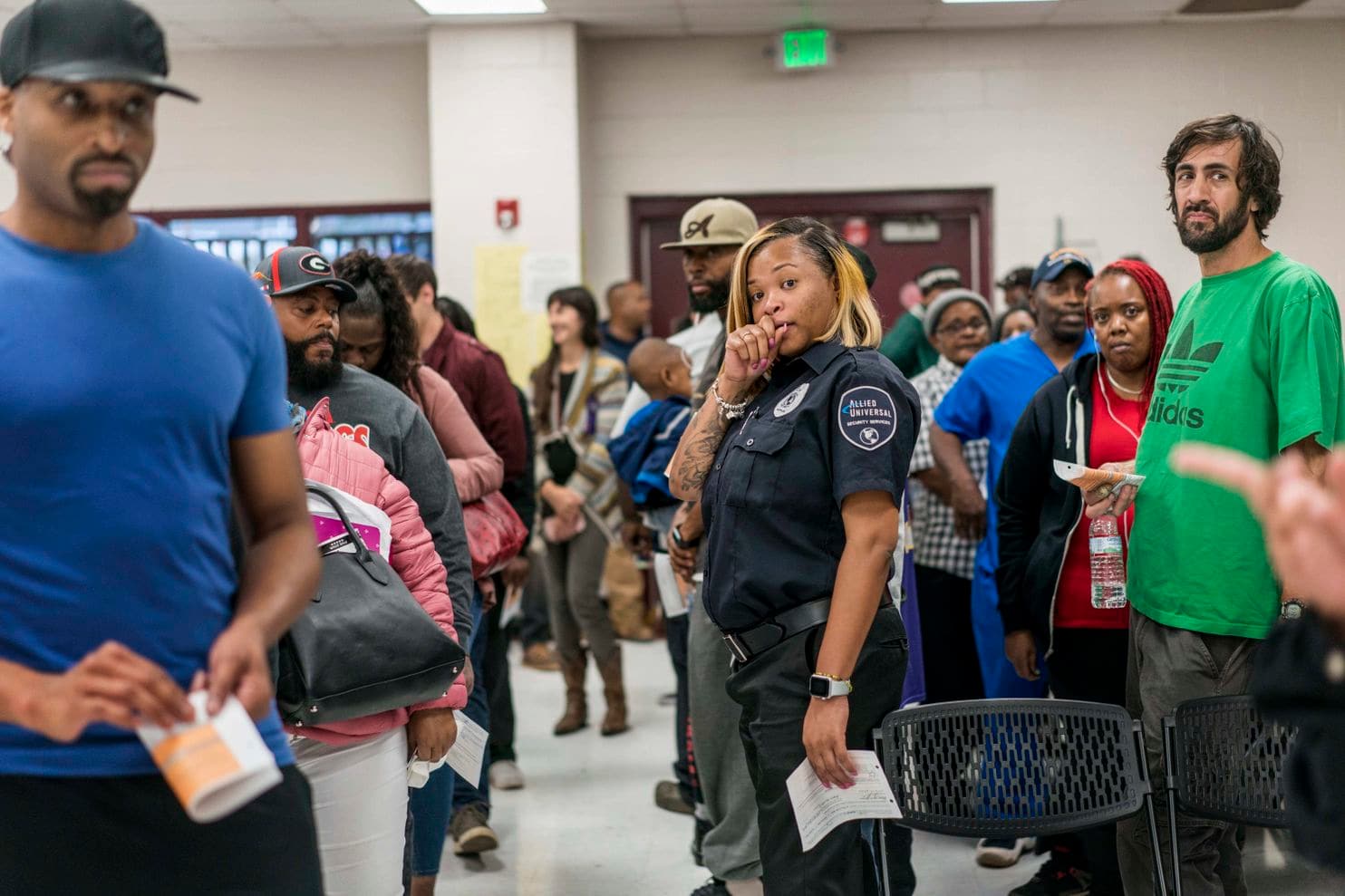 The loudest of those complaints came from Georgia, where issues of race, ballot access and election fairness have fueled an acrimonious governor’s contest between Democrat Stacey Abrams and Republican Brian Kemp. Abrams, a former state lawmaker, would be the nation’s first black female governor, while Kemp, the secretary of state, who oversees elections, has faced accusations of trying to suppress the minority vote.

In one downtown Atlanta precinct, voters waited three hours to cast ballots after local election officials initially sent only three voting machines to serve more than 3,000 registered voters. In suburban Gwinnett County, the wait surpassed four hours as election officials opened the polls only to discover that their voting machines were not working at all, voters said.

Both locations serve predominantly African American voters, feeding worries among some voters that specific groups were being disenfranchised amid signs of record turnout for a midterm election.

“Look at the people here,” said Gabe Okoye, chairman of the Gwinnett County Democratic Party, as he watched mostly black voters enter and leave the voting location. “See the demography of these voters.”

Here’s the story behind your ‘I Voted’ sticker
There’s a reason why your “I Voted” sticker looks different than your friend’s from across the country. (Allie Caren/The Washington Post)

The wave of complaints from voters came at the end of a campaign season dominated by concerns about ballot access and voting rights. It remained unclear Tuesday how many of the complaints were legitimate, how many voters were affected and whether the problems would affect the outcome of any races.

Some of the anxiety stemmed from a spate of restrictive voting laws passed by Republicans in recent years affecting dozens of this year’s closely contested races for the U.S. House and Senate, and governorships.

Republicans have said the tough new rules are necessary to combat voter fraud. On Monday, President Trump and Attorney General Jeff Sessions warned against voter fraud, although studies have found no evidence of widespread fraud.

Voting rights activists argue that the laws disproportionately affect young Americans and minorities, who tend to vote Democratic. They accused Trump of trying to intimidate voters of color.

The surge in reports of voting problems also coincided with heightened enthusiasm across the country about participating in this year’s races, with early voting tallies in dozens of states far outpacing those of 2014.

On Tuesday, election officials in states including Texas, Alabama, North Carolina, Indiana and Georgia extended voting hours to accommodate long lines at polling locations. In Atlanta, some precincts were being kept open as late as 10 p.m. Some states, including North Dakota, were also contending with low supplies of ballots, and voters were still in line Tuesday evening.

In Prince George’s County, Md., two precincts ran out of paper ballots, leaving hundreds of voters in line long after the 8 p.m. poll closing time. While they were permitted to stay in line and cast ballots, the Associated Press called the governor’s race for Republican Larry Hogan at 9:07 p.m., before voting in Prince George’s was complete. Supporters of Democratic gubernatorial candidate Ben Jealous were outraged, and the former NAACP chief tweeted: “Stay in line. Keep voting.”

Nationally, a coalition of civil rights groups reported receiving more than 29,000 complaints of voting irregularities as of 8 p.m. — a higher call volume than in any recent midterm voting — and referred many of them to state and local election officials, the groups said in a news conference in Washington.

Together, the organizations deployed about 6,500 lawyers and monitors in 30 states to protect ballot access — more than in any previous election.

“Our goal is to make sure that every eligible American that seeks to have their voice heard is able to do so this election cycle,” said Kristen Clarke, executive director of the Lawyers Committee for Civil Rights Under Law, one of the groups that joined forces to monitor elections and run a voter hotline this year. The coalition includes the NAACP, Common Cause and Asian Americans Advancing Justice.

Also in Arizona, a judge declined to keep some polling places open in Maricopa County that had opened late. Clarke said voters were “disenfranchised” in Arizona as a result.

In New York, Corey Johnson, the speaker of the New York City Council, said voting precincts were hampered by broken scanners in all five boroughs. Voters with ballots stood in lines in rain — soaking the ballots and further complicating the process of using electronic scanners.

Voting rights advocates said some of the problems stemmed from equipment that has not been replaced in more than a decade. The machines date to shortly after the presidential recount in Florida in 2000, when Congress sent billions of dollars to the states to replace outdated equipment. Another round of replacement is overdue, advocates said.

Across the country, reports about huge turnout were punctuated with complaints about voters’ facing obstacles in casting their ballots.

Voters with limited English proficiency in the Houston area said they were being blocked from taking interpreters in with them to help them vote, as is provided for under the Voting Rights Act, according to civil rights groups.

Hector De Leon, a spokesman for Harris County, which includes Houston, said he was not aware of complaints from non-English speakers about not being able to have interpreters with them.

In North Dakota, a voting rights lawyer said dozens of Native American voters were being turned away because of issues with their identification. Poll workers were rejecting identification issued by tribal officials, advising voters not to initial ballots, even though the law requires it, and discouraging voters from casting provisional ballots when they arrived without proper identification, according to Carla Fredericks, director of the Indian Law Clinic at the University of Colorado at Boulder.

“After I caught a voter who was being denied his right to vote and told him to go back in and request a set-aside ballot, the election worker told me I was interfering and need to leave,” said Fredericks, a member of the Mandan, Hidatsa Arikara Nation, located in central North Dakota.

In Porter County, Ind., where Democratic Sen. Joe Donnelly was trying to fend off a strong challenge from Republican Mike Braun, a judge ordered 12 polling places to stay open late after the local Democratic Party complained about openings up to three hours behind schedule.

“It’s a matter a fairness to the voter, without respect to partisan politics,” said Monica Conrad, an attorney for the Porter County Democratic Party. Local Republicans unsuccessfully challenged the order by Superior Court Judge Roger Bradford, arguing that the Democrats had not provided enough evidence that polls opened late, said attorney Chris Buckley.

Accusations of intimidation surfaced after U.S. Customs and Border Protection announced plans to run a “crowd-control” exercise Tuesday near a Hispanic neighborhood in El Paso — the hometown of Democratic Rep. Beto O’Rourke, who is challenging Republican Sen. Ted Cruz in a closely contested race in Texas.

On Tuesday morning, the agency abruptly canceled the exercise after critics raised concerns about voter suppression.

The center of voting anxiety was Georgia, where the bitter gubernatorial contest has played out as an emotional battle over voting rights.

Tensions mounted in the weeks before Election Day after the revelation that thousands of voter registration applications had been suspended, most of them belonging to people of color or immigrants, under a new state law requiring an exact match between the application and driver or Social Security records. Separately, hundreds of absentee ballots were challenged by officials, many in minority-heavy Gwinett County.

On Tuesday, voters at one polling location in Gwinett County reported a wait of more than four hours to cast ballots.

“This was voter suppression at its finest,” said Takeya Sneeze, an African American truck driver who said she watched 100 voters leave a polling location at an elementary school without casting ballots after discovering that the machines were not working.

Sneeze said she went to Walmart twice to get water and snacks to encourage people to stay in line and wait.

Joe Sorenson, a spokesman for Gwinnett County, said that voting at the elementary school would be extended 25 minutes but that any further extension would require a judge’s order.

Sorenson said the county encountered problems at five polling locations out of 156. One had the wrong electrical power cords for its equipment, and the others had issues with polling machines, but he said officials discovered the problems quickly and began issuing provisional ballots.

Brittany Herbert, 32, a lawyer, said she arrived at the Pittman Park Recreation Center in Southwest Atlanta at 8 a.m. and found the polling place in chaos. When she tried to check in, she was told she’d have to wait, so she left to go to work and returned about 4:15 p.m. At 5:15, she estimated that she had another 45 minutes to wait.

“Voting is always really important to me,” she said. “I knew at the end of the day I had to. I also knew that my family and friends would shame me if I didn’t.”

A spokeswoman for the Fulton County elections office acknowledged that a handful of polling places encountered problems Tuesday.

“Today’s election is a big one for this state, and there are a lot of enthusiastic voters out there,” said spokeswoman April Majors. “We’re happy about that, but unfortunately, the enthusiasm is what is causing the long lines.”